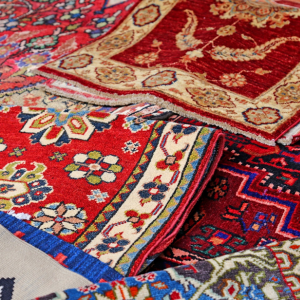 Carpet weaving is a universal art because the beauty of the maze of lines, natural elements and the role-playing of various colors all together create an effect that the viewer sometimes can not ignore. In ancient times, carpets were used as a symbol of social status and historical events. The rich used people to decorate their palaces to weave beautiful and unique carpets. Carpets were also considered as precious gifts for the guests. In a way, the holy places were unique carpets that somehow directed the path of human movement from the entrance to the desired destination. Some carpets were considered an important piece of treasure history due to their handicrafts or monuments and were preserved in centers. Today, the role of carpets in our lives has a higher status than floor coverings. The carpets produced were usually appropriate to the situation of the people of their time after an incident or cultural, social and historical event, and by observing a carpet, it can be attributed to an ethnic group and know the psychology of colors and symbols used in it. . It may be argued that the science of the psychology of colors and shapes did not exist in the past, so the more important point is that man without any science has the desire to combine colors and express his situation through different shapes and cold and warm colors. And has been inherently interested in following nature. So the carpets were completely influenced by environmental and cultural factors and in contrast were very influential on the situation of the people of their time and later generations. From the beginning, the role of carpets was hacked on metal utensils in the form of engravings or tiles of important buildings and pottery. Carpets are considered as the most special decorative elements of the house after a while by promoting the culture of apartment living and the psychological effect of decoration on the living environment, which can be seen even in the most minimal type of decorations, even in a single color or with simple patterns. Carpets show the place of human accumulation to the human eyes, and man knows with a previous knowledge recorded in his mind that in any space the carpet is spread, it will bring peace and will provide some kind of comfort and attention. Sometimes carpets represent a special space so that at first glance at the carpet in our minds we create an image of the space where the carpet can be used and attribute the carpet to the environment. Such as corridor carpets to determine the path, mosque altar carpets, etc. Over time, most rugs became a form of wall decoration, and people preferred to use a simple rug on the floor and an exquisite rug on the surface of their walls, creating a luxurious decoration while using minimal elements. In the boho and vintage styles, some designers hung small fabrics or kilims on the wall, and sometimes saw the original motifs of Turkmen carpets and valuable symbols, as if they energized and relieved human stress. Shortly afterwards, so-called collage fabrics with carpet designs were produced that had various uses such as tablecloths, sofa shawls, clothes, and so on. In simpler terms, people became so attached to the ancient designs of the carpet that they were not deprived of the color and pattern of the carpet in their everyday clothes. In a way, the psychological impact of the role of carpets on people's lives is quite obvious. Among the charms of Iranian carpets, we can mention its clever and artistic details, which beautifully combine the range of primary and secondary colors and depict a unique effect. The influence of art on people and people on the artist is an undeniable process. Today, the geometric patterns of Iranian carpets go beyond the carpet weaving industry. The role of carpets is drawn on decorative and used forms, so that foreign artists sometimes use these designs in different colors on tangible objects in everyday human life to create their works, such as artists who now paint the role of carpets on shoes and They are introduced to the society as a work of art so that the person knows that every step he takes will have a symbol of the beliefs of the past, affecting his present and future. Author: Yasman Tahmasebi